Want to do a little Living Out Loud yourself? Sign up to receive Confidence Outside of Your Comfort Zone! An E-book and journal!

I am working on a blog about the dining room/pantry addition, I am having trouble getting pics from my hubby but I will get it done and posted soon. In the mean time I thought I should blog about something major that has been happening and that I feel I can’t keep bottled up or just talk to Nathan about. Weight loss.

About 4  years ago I weighed 350 lbs. yep 350…crazy right. I always comforted myself with the thought that it didn’t matter, I was confident that I was still pretty had a good personality and was living the life I wanted. Then the bottom fell out and I was devastated in lots of ways. Suffice it to say that a cheating partner, a major split and major emotional turmoil I decided to do something about how unhappy I was like yesterday! So I had Lap-band surgery and I lost weight CRAZY fast! I had lost 170 lbs at my smallest in just around a year. I also started working on myself and figuring out what made me happy that had absolutely nothing to do with the person I was seeing or not seeing. I started getting happy and it was the craziest thing but I felt fun and sexy and a whole list of things that I hadn’t felt about myself in a really long time. The hurt was fading and the fun was starting! Then I met Nathan. And it was sort of like the bottom fell out again but in a VERY good way. I was happy with all of the areas of my life and was busy falling madly in love. I am not going to go into a bunch of personal details but it definitely got rocky for a while and smoothed back out after a proposal, a whirlwind wedding, and then the announcement of a baby on the way.

At the beginning of my pregnancy I had MAJOR morning sickness and when you throw in that it was the worst time of year for my lap-band I was in serious danger of becoming dehydrated. So I had my band loosened and things got better. But the pounds started packing on pretty fast…the doctor told me 30-40 lbs was acceptable for my weight gain. HAHAHAHA on delivery day I had gained 79 lbs. 79! I really wanted to try to lose it without tightening my band. you know like a “normal” person. At first I was doing good. By my 6 week check up I had lost right at 30 lbs. Feeling good I was back at work, picking up kids and a new momma. And also a fast food junkie. 4 weeks ago I weighed myself….286. Wait WHAT! 286? What had happened to my weight loss??? So I went and had my first band adjustment. I lost 12 lbs without even trying because even though my band isn’t nearly tight enough to get back to 210 (wedding day weight and then current goal) without major work I do have some restriction.  I got the MYFitnessPal app o my phone and started counting calories. I know myself and if I just cut things out I will tell this weight loss to take a flying jump and eat cookies till I feel better. So I am counting calories so I can still have the things I like and just learn how to have them without cheating my diet and myself. I have lost 2 lbs a week so far which is the projected weight loss for eating the calories allotted to e by the app. This weekend I decided that it wasn’t enough! A dear friend is getting married in July in Las Vegas and I know what dress I want to wear so I have goals…like GOALS. So we are upping the ante this week with exercise and seeing what happens to that 2 lbs a week loss.

New goal: Leaving my band where it is and getting the rest of the weight off. EXCEPT Nathan I were talking and turns out that 210 really isn’t acceptable anymore. Looks like I am trying to lose a whole person again because the high end of my ideal weight is 140…..which is quite a bit lower than my previous weight. Do I think I will get to 140? I have no idea but I am going to try my darnedest! And with my awesome husband who loves me no matter what FOR REAL and is standing back there cheering me on like every pound I lose really is something to celebrate I think I just might!

So after major grief about names I liked while pregnant we decided not to tell anybody what names we were actually deciding between. During the actually picking a name process we each immediately black listed a couple of names. Then to add (or maybe detract) from the mess we decided to name our little boy after his daddy. But his daddy didn’t want a junior or a second so we went with his daddy’s first name and we chose a different middle name. My husband did the same thing with his older son. So now we had a Nathan Justin (my husband) and a Nathan Alexander (older son) and Nathan ……. (unborn baby).

We came down to two names ultimately Nathan Abraham or Nathan Leonidas. We planned to call him by his middle name so it really had to be the RIGHT name. We went back and forth, one day I adored Abraham and the next Leonidas was the front runner. We weighed the pros and cons of each name. I really like longer names that can be shortened when they are babies/kids but can be an   “adult ” name is they so chose when they get older. That probably has something to do with being named Amy Lee….there was no changing that name to anything else even if I wanted to, and I was always a little jealous of Stephanie’s and Elenore’s. Also I really like old fashion names which Abraham is and Leonidas…well its definitely an old name! But mostly we wanted a strong name, something to really grow into and become the man he will be one day. We both believe whole heartedley in the strength of a name.

Then I went into labor. We decided we would know when we saw him.

Then I saw his sweet face and looked at Nathan and said “Leonidas?” He smiled and agreed and with tears in my eyes we named our son Nathan Leonidas.

I know he might have a tough time with such a strong and different name. I already have people saying negative things about it but I also have people telling me they love it. People ask if we call him anything else, and the truth is his big sisters and brother sometimes call him Leo, as do people that find Leonidas uncomfortable for whatever reason. But he is my Leonidas.

Most importantly I know when I see his face it was the right decision. 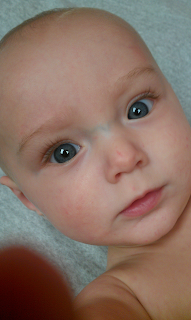 Being the girl who decided to go for it!

My bag is full to the brim with love, laughter and good times! I am an adventurer, a warrior and a badass. On my best days I am also a wife, a mother, a friend and more than a little crazy! Let's dig deeper →

I’m Coming For Everything They Said I Couldn’t Have